btn.group is soon to launch Limit Orders. We are thinking it could be a big deal for the network and would be good to have some funds to ramp up the number of servers, other cloud services, auditing etc so that users are more likely to have a positive experience with the network.

Use of cloud services and other expenditure will depend on date, but to simplify, have combined. There will be significant usage of SCRT for gas during testing also, but I have not included it and it will come from anything left over.

Have you received funding for this project before?

This project and btn.group have not yet received any funding.

Have you received funding for a different project before?

I have received a grant from Shade Protocol for a different project which was finished and will be released in the next couple of months.

What will happen after the three months?

Hard to say for sure but we have always built the project with self sufficiency in mind. If the community decides on no more funding, things will continue. As can be seen, we have not requested any funding for the project for development so it wouldn’t make any sense for us to give up after 3 months considering the work put into it so far.

No matter what, the project is going ahead, but I truly believe this funding will make a difference and it will be a win win for everyone.
Let me know your thoughts or if you need any more details.
Thanks for your time.

How the communities’ funds have been spent so far.

this is a good idea. Btw who is doing your audits for $1k?

I’ve actually budgeted 3k for this and in the past I have asked certain members of the community.

Some members of the community have requested that I make the code for the limit order contract public. I think this is more than fair as I am asking for funding: 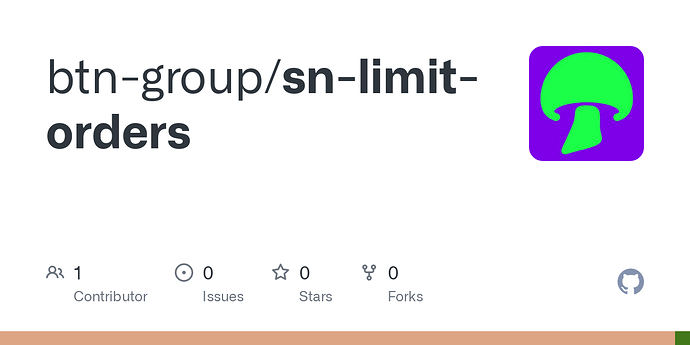 Contribute to btn-group/sn-limit-orders development by creating an account on GitHub.

Let me know if you have any questions.

Update: Baedrik has agreed to do this.

So this is an orderbook based dex essentially? Or do the orders also get filled by Sienna/Sefi and other dexes on the network?

I think Steven’s worth supporting, I can’t comment much on the infra fees so hopefully someone chimes in on that front (they seem very high) but nevertheless hope this comes through.

This is great! Thanks Steven for all the stuff you are building, I think we should support this. That said, I would like to see a better/longer description of what it is, what problem it solves, what functionality it has, where it will be implemented, etc… so aside from technical details the wider community could better understand what they are voting for.

So this is an orderbook based dex essentially?
Yes

Or do the orders also get filled by Sienna/Sefi and other dexes on the network?

I just wanted to spill my thoughts here and the general plan.

Please let me know if you would like more details.

Is there any degree of automation on processing orders or is it manual?

Automated via the bots.

Hey Avret, that is on the higher end but in our thoughts:

How easy will it be to pull in additional DEXs in the future? Will this be included in the efforts? I see Polymer mentioned.

The back end structure is mostly set up. Some adjustments may have to be made to the DEX aggregator contract depending on the contracts from polymer etc.

It is in our best interest to integrate as much as possible so efforts will be made with or without funding.

We would process those orders where applicable (any combination of other limit orders and swapping via secret swap and sienna swap pools) via bots.

As I understand, the orders will be kept in the smart contract but a trading bot will try to trade the orders against AMM(s). Ok but how will you pay network fees of the failed attempts?

Hi abduraman.
This is correct, except that the limit orders will also be traded against each other which will make transactions more likely to succeed.

We are also trialling charging a small execution fee in sscrt to cover those costs.

Voting is now open for this proposal:

Let me know if any issues or questions.

Domerium Labs will be voting ‘No’ on this proposal.

We do so with conflicted minds. Let me first say that we have nothing against btn.group, and we celebrate the efforts made her for moving the DeFi space of Secret Network forward.

We have intentionally waited for the last 24 hrs to vote, as we would not have voted ‘No’ if the voting was a close call. Based on current voting progress our ‘No’ vote will not impact the outcome of the proposal (pass), and if it did we would have voted to see the proposal pass.

Our ‘No’ vote should be seen as a statement for future proposals and bring more professionalism to Secret Network Governance.

The proposal does not read like a business plan, only the implementation of technology. As a network, we have to aim for applications that do not only make the technological threshold of launching to mainnet. We have to ensure that the investment we make with community funds results in long-term value accrual of SCRT as the network token. Such long-term value accrual means that we need to have applications and teams that strive towards long-term business success and plan accordingly.

btn.group is one of the first dev teams on the network, they have built valuable products. We recognize and celebrate that. However, that shouldn’t lower the expectation of detail in their proposal. If anything, I would like to see btn.group utilize their experience to put forward proposals that go beyond what any other team brings to the table in terms of professionalism, to set an example for other teams on how applications can be planned, funded, and ultimately succeed.

Edits:
Note: Due to holidays and governance call’s new timeslot we have not been able to actively participate during the discussion phase of this proposal.