Recently there has been discussion about what it would mean as a protocol to invest heavily into dev relations and hackathons. The primary of sources of funding on Secret Network are as follows:

It would appear to me we are missing an entire vertical in the form of hackathons and developer relations - because Secret Network is a permissionless chain, the key to its success is building a bustling economy of apps and users. In order to discover killer use cases, we need to continually seek out fresh talent, reward them for experimentation, and give them a path to working on the protocol full time (from one of the above categories). Before I begin, I want to note that I believe the Terra Fund (run by SLABs) is making excellent progress, and I consider this part of the grants category.

The path in my mind is as follows:
(1) Dev checks out a hackathon for fun / because there are incentives
(2) Dev builds a proof of concept product during hackathon

During this stage, the protocol benefits from two things: (1) Use case experimentation (2) Talent discovery (3) Marketing of MVPs

The next step of the funnel:
(3) Dev post hackathon is approached to complete a milestone based grant to flesh out their hackathon project into an MVP
(4) During the grant stage, if the product and builder is promising they are put in touch with (1) VCs (2) Incubator (3) Business partners (4) Fellow developers that could join them
(5) Dev chooses their own adventure from here, and are now able to build this full time.

What is important to note is that dev relations is the glue that connects each piece of the pipeline. We currently don’t have an org solely focused on this . Next, we need to ensure that someone is devoted to hosting hackathons, they are the top of the dev discovery pipeline.

I firmly believe that it is worth it for the protocol to heavily invest in an independent team solely focused on this. Focus is the scarce resource - by having a stand-alone org working (symbiotically) on this function both SLABs and SF are freed up to do what they are best at.

Just some food for a thought.

highly in support of this

This is a no brainer for me.

Lets flesh this out.

cross-posting my thoughts from tg:

It would be great to see SCRT collaborate with other Cosmos projects (namely Cosmos-hub, Osmosis, Juno) that are launching developer education & hackathons! Philosophically all of these chains agree and interoperate and would benefit from a joint effort, and this way more funds & community support* can be pooled.

The cosmos academy is a concrete example of something secret could collab with: https://academy.cosmos.network/

I would venture to guess that many devs porting over from other networks or web2 do not stumble upon cosmos first, and extremely unlikely SCRT first (or even second). Usually more of BTC>ETH>???>Cosmos>SCRT from the people I’ve spoken with. So possibly our goal is to look to create exposure up-funnel.

I’m not a marketing brain-genius, but this just seems plausible to me.

Also highly in support of this. Definitely seems like a no-brainer, but for context I’d want it to be well resourced without increasing taxes. Not afraid to spend, but lets be thoughtful❤️

This sounds like a great initiative and the business development committee would be happy to support this effort. I can immediately see this fitting in with some of the initiatives we’re working on, and would be happy to coordinate efforts with whoever ends up leading.

I think this is a good idea but who’s going to put their time into it? Finding human resources for this seems like the biggest issue.

I believe the human resources could be coordinated via Secret Foundation & SLABs recommendations.

But this one is a clear yes from me. Let’s do one hackathon a week for the next 10 years

Support this. No brainer. Feels like we got a few projects building and dropped all the hackathons, want to see them back, a lot of them

Happy to do whatever it takes to get this off the ground with our uni outreach & events teams!

We need to record or live stream lots of these dev workshop events as well… I did an entry-level Secret Workshop at a privacy forum in Spain last night & quite a few devs there are interested in following this SCRT Labs workshop in NYC! 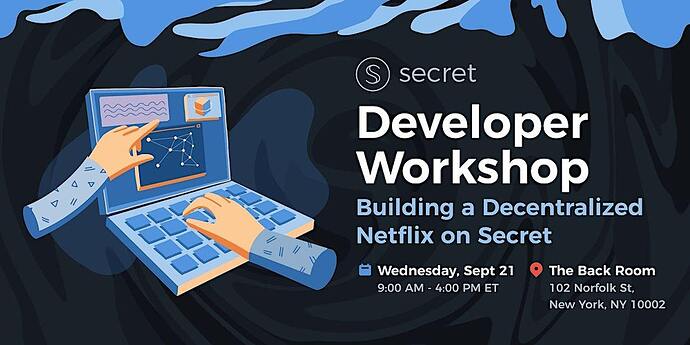 Moar video content is the most cost-effective way to generate dev interest for hackathons imo. @Stefan_DomeriumLabs had some brilliant examples of dev tutorials a few weeks ago that can be used as inspiration & a Vimeo account is very cheap to record quick videos & audio.

It is our vision to lower the bar for developers building secret applications in our ecosystem and fund them to do so. We believe hackathons are one of the best ways to onboard interested developers and help them see the potential in what can be exclusively built on our network.

Our educational platform is still on schedule to launch mid-October, which comes with a Secret IDE (built by the Digiline team) that will help onboard these new developers quicker. The developer docs that Ertemann, Lumi, Gino and others put together are in a much better place to support a hackathon as well.

Again, Secret University is currently looking to fill the gap for developer onboarding and support. However should we find additional resources for hackathon planning and developer relations, we would be happy to support in any way possible. In the meantime, we look to continue working with existing teams to sponsor or coordinate efforts for these initiatives.

I highly support this! I’ve raised the motion two months ago, I’m glad someone else is looking into this direction. In Africa we have few amount of Dev (Rust base dev) I believe we could gain more adoption and have devs build innovative apps by hosting Hackathons and training Devs in Rust. I’ve met dev who would love to build on Secret but has very little knowledge using Rust.

Hundreds of Hackathon are been organize in Africa yearly by other protocols, through this they’ve gained adoption and visibility. We can do the same with University Relations and Events Working groups.

You know I’ve always supported this. It’s always been a matter of finding the people to do it. All for it with the people in place.

Sensing there is already a consensus that this is a good idea but someone needs to “find the people to do it.” So, we have scarce human capital vs scarce funding capital. There are multiple potential sources of initial funding, including Labs, Foundation, and on-chain resources.

There’s a few paths from here:

There’s precedent for 2) with the formation of the Secret Agency. 100% of resources for this have come from only Foundation (so far). But there’s no reason that would need to be the case for a function this critical, and we probably want to resource it more substantially up front.

In no scenario could this organization (if external) function without very close coordination and collaboration with SCRT Labs. We would absolutely need core protocol developer buyin on whichever contributors or organizations would be owning these devrel functions. Without that buyin, we would just be wasting energy. So Labs needs to be involved from the first moment of this.

In any event, what’s missing right now is someone who is claiming that they will own finding the solution to this problem. I can commit to continuing to be very loud about needing to solve the problem, but honestly, if there is community consensus this is a huge blocker, someone at Labs likely needs to take the lead on establishing a strategy for filling this function.

One question I have is:

is there anyone reading this post, in the Secret ecosystem right now and knowledgeable of it, who is currently available to work full-time (or close to it) to solve this problem and who has relevant expertise in this area?

It seems like to me as well that everyone thinks that we have the funding to be able to support new independent entities where the foundation or SLABs cannot/will not tackle.

It also seems like we agree that although we CAN fund said organization, there is no organization to be funded nor individuals willing to take the responsibility.

Which leads me to:
What do you guys think of announcing some “pool” or “fund” specifically with intention of reaching out to other ecosystems. Much like the $450 million dollar fund that was announced last year, this could create the traction we need or the incentives we need to either:

Whichever the solution, the way forward to me is not to push these areas onto SLABs or the Foundation anymore, but to take initiative as a community and push it forward ourselves much like what @Carter-Woetzel proposes here.

This is more of a service agreement than a new pool of funding. We don’t want a dozen competing dev-rel orgs; we want a single competent organization that can represent the network and its interests. Something more formal than a committee, since self-sustainability will be critical. It can be supported by many orgs, from BD to Secret U to Labs to SF, but someone has to own this function for it to succeed.

I am happy to help in any capacity i can, but i am no dev. At least not yet…

I think the person leading this needs a solid understanding of the techstack, dev tools, and capacity.

There must be someone who fits the bill? Someone who could maintain relations with onboarded and organize and lead a group dedicated to the same function.

We have a ton of bright minds in this ecosystem, some of the best I have seen in any ecosystem.

Lets take one of the brightest and let them take ownership of this.

This is not something for the network to sleep on, cf: The Sapphire Hackathon | Oasis Network

Secret network has participated with Cosmos hackathons in the past but if I recall they were somewhat narrowly scoped - eg for gaming. And I haven’t seen them involved in the most recent ones.

If we can all agree that Secret can adopt both the Privacy-as-a-Service and “thriving layer-1” narratives then we really should be paying closer attention to how we approach developer relations. Regardless if we want to target institutions or entrepreneurs, we need more people to build, experiment, and iterate if we want to see the network thrive in the future. We don’t want to continue with a reputation of being “difficult to build on” the next time the market booms. Building with privacy in mind should be the default way of thinking for web3 builders, right? We should be trying to make development on the network as clear as we can so that people can experiment fast and build gems.

Out of respect for the community and the way the committees functioned during the last bull market (by providing incentives to the community for contributions), I chose to work on building Secret University as a way to scale developer onboarding and incentivize devs to give back to the community.

It should be needless to say that I would gladly support any entity or leader who wants to fill this position. If SU can help in any way in the future, in regards to hackathons, we would be happy to contribute.