Interested. I’m trying to be active but I haven’t met many people that actually want to help
Me other than rip me off.

Join the discord, and Working groups that is where to start.

Definitely interested in throwing my hat into the ring for this. But could flesh this out, i.e, what kind of budget support can we allocate for hackathons, what’s exclusively in the scope of this role vs what we’re gonna collab with other committees, the foundation, and slabs on. Seems like setting up hackathons will be the most rigorous part of this role, but it’s very similar to the job of “Developer Advocate” which is common in other ecosystems and would be great here.

Hey guys! Just following up on the Leadership call this morning – posting some information I have on the scope for developer relations / experience, evangelizing, onboarding and all of that good stuff

A bit of context:

About a year ago, around the time that Can had announced he was leaving SN, he reached out to me about creating a fellowship role that would include dev relations, hackathons, etc. And also to transition some of the CPO initiatives he’d been handling. He, Guy and I collaborated on this set of roles and responsibilities, and goals the fellowship would involve.

At the end of the day, it wasn’t a good fit for me. It was very time-consuming and a huge amount of multitasking. And I was more interested in another project I’d been hoping to get off the ground (Secret Boxes, which is now part of Secret University).

Thank you @Carter-Woetzel and everyone else who’s been contributing to this very needed conversation! And to those who are interested in stepping up for this important initiative

I’m sharing this doc in the hopes that everyone can get a really detailed idea of what’s involved with dev-x on Secret Network, as it was formulated a year ago. Understanding that things may have changed in terms of the needs of the network with respect to the developer onboarding and experience, I hope this information is still helpful and can be used as an aid to determine what this independent org might take on as part of its scope.

NOTE: this document includes some roles/responsibilities that have since been absorbed by the Dev Committee, BizDev Committee and Secret University.

My other motivation in sharing this information is that I’ve gotten the sense that some people think this can be done by one full-time person. I hope you guys seriously consider making this an independently-funded organization, much like the Secret Foundation, resourced with well-respected leaders in SN and finally making dev onboarding and relations one of the key priorities for the awareness and growth of the ecosystem. 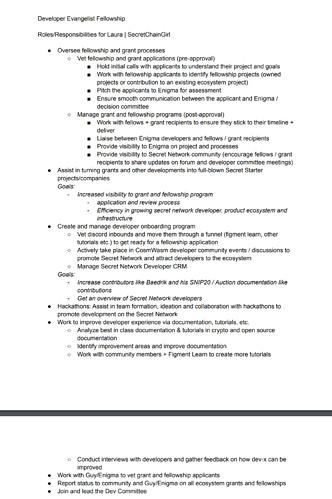 these sure are the roles that need to be filled

This could absolutely be a team. I can definitely think of some people that would be very good for this (some of which have already reached out to me about it so I know they’re interested)

I was speaking to Secret on TG from Contango re: Hackathons and Dev Rel.

I agree that hackathons and regular partnership events (meet ups) are an important part of building both the funnel and foundation for long term Partnership and the creation of a Developer Studio environment.

It comes down to scaleable mgmt, BD and a continual network of both Sponsors and Mentors for participation in the hacks and in between developer events.

The expenses for this group can be covered exclusively through event Sponsors (fostering a network of Venture Firms to participate and funnel Secret projects into for funding).

Initially resource wise this can be done with 1-2 ppl on team. I would suggest starting entirely with virtual only hackathons, scaling both prizes and focus on each subsequent hack.

In addition to the 1-2 person head count, typically the hack requires a budget of 10-20k for tech stack and support; marketing costs (paid acquisition on social and search) budget of $2,500 -10k (depending on scope of hack).

BD and Growth Hackers leveraged from within the Secret community are necessary to extend the reach of these initial few hackathons. Once you have built the audience within the Secret community it scales faster. But for the first few you’re going to need audience generation through organic and paid; and a lot of outreach within native developer communities (web2,web3 and educational).

Finally, the partnerships (sponsors) are key to extending reach.

Which is why Hacks really set the basis for a chain’s “studio”, “venture” and eventually “marketing” sub orgs. (see Polygon for a good example).