Really glad for this extensive post. A lot of your comments and points answered my questions alone. Thanks!

There was a point made on the gov call today, which I generally agree with.

Would there be much downside from having a requirement that dapps be live for at least 2 weeks before receiving L1 incentives?

Seeing the quality of the dapp would make it easier to assess proposals.

Only downside is that it could reduce the impact of the campaign since it would occur weeks after launch versus at launch.

If people are strongly in favor of waiting to see the app on mainnet before supporting an incentives campaign we’d be open to altering timeline - I’m curious what @guy thinks about this.

@winston @orageux101 would having the app on a testnet endpoint for anyone to be able to access / use in advance of mainnet be an acceptable / adequate substitute?

I’ll be voting “no” on this proposal

The proposal doesn’t describe ShadeSwap, at all. It is a long post about Privacy, About the state of DeFi, about the team, about the history of Shade Protocol. It is loaded with non-specific or non-relevant details. It is overly lengthy and never gets to the point.
I still have no idea what ShadeSwap is exactly going to be. I can’t explain to myself why put 100k into a Dapp that I haven’t seen or isn’t at the very least described.

I generally support the idea of one-time liquidity injections. After reading this I think I will take a stance that I won’t vote ‘Yes’ until I have been able to see, test, and/or use the Dapp.

The above 4-step approach looks both realistic and fair to all parties IMHO. We get to see what we invest the pool’s resources in, the team gets injection 7 days after launch. 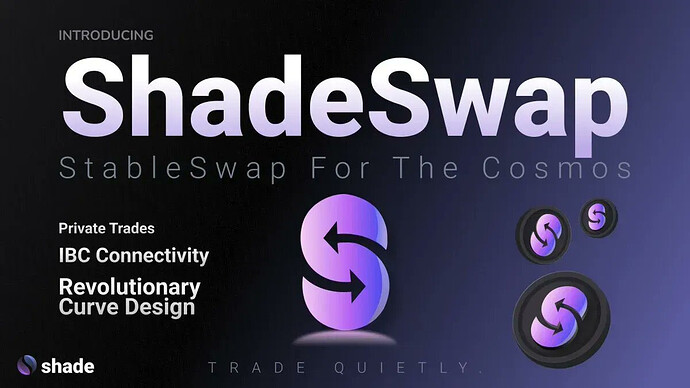 Greetings @Stefan_DomeriumLabs we would be more than happy to describe ShadeSwap if that would be helpful information:

DEX Problems
Decentralized exchanges to date suffer from a range of issues with respect to sustainability and usability. Some of these key problems are as follows:

Miner Extractable Value is the process by which arbitrage entities insert their transactions and trades in front of a user in anticipation of their trade - resulting in micro profits that the user suffers from in the form of greater slippage incurred. This front-running process is made possible because to date, the majority of blockchain mempools are public by default.

ShadeSwap solves this problem by being built on Secret Network - a private-by-default blockchain which has an encrypted mempool as well as privacy-preserving smart contracts (known as “secret contracts”).

Entities are unable to front-run trades on ShadeSwap because trades are kept encrypted, preventing front-runners from extracting profits in a risk free manner at the cost of the user.

Tokens that are listed on ShadeSwap use the Secret Network SNIP-20 to SNIP-23 token standard. This token standard empowers private by default transactions where the only visible data is that user A interacted with contract address B. The amount of funds moved as well as where the destination address is are kept encrypted within the publicly visible JSON file storing the data.

By using ShadeSwap, users who interact with ShadeSwap are trading tokens that protect their transaction privacy by default while simultaneously protecting their trades. 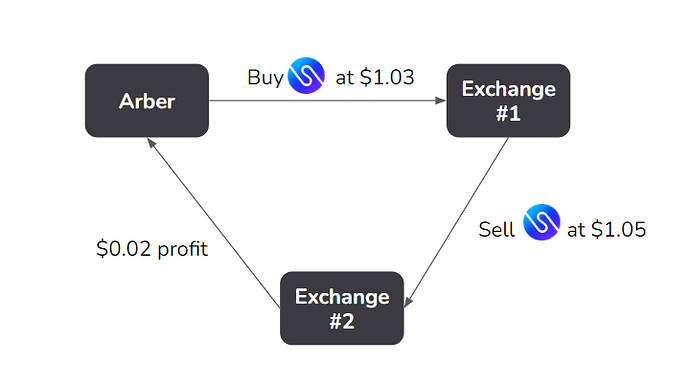 Arbitrage is defined as capitalization on inefficient markets. Inefficient markets are simply when two markets list the same asset at different prices. Arbitrage happens all the time, and everywhere that there are markets, there is arbitrage. Arbitrage is essential for markets to be fair, and it ensures users are receiving the same price for the asset regardless of where you are from or where you are trading. Arbitrageurs are rewarded for providing this service to consumers in the form of risk free profits (assuming transactions execute and gas is not expended in the process).

Using protocol owned arbitrage and permissioning, Shade Protocol directly arbs price disparities every time a user executes a trade on ShadeSwap. Users earn a portion from the arb profit incurred from the user’s impact on the market, and the protocol keeps the rest. In essence, the service and revenue is created and captured by both users and protocol instead of external entities performing this valuable task. 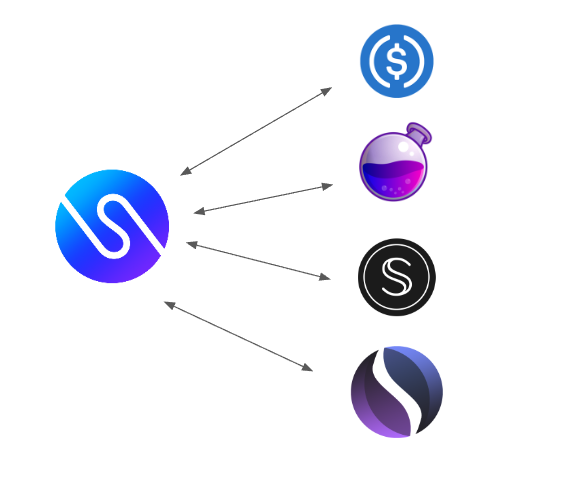 DEXs struggle with having deep liquidity that their router can leverage - often times using their native governance token as the primary pairing. Unfortunately, the volatility of these governance pairs increase the risk of impermanence loss - increasing the required yield in order to attract liquidity. Additionally, in order to offset the risk introduced from volatile governance token pairings liquidity providers are likely to sell off the governance token which decreases the collective value of the liquidity across the entirety of the DEX.

Shade Protocol solves this by using SILK as the primary pairing on all pairs on ShadeSwap. Because Silk is a stable asset, this significantly decreases the amount of risk a liquidity provider has to take which decreases the amount of emissions that must be used to attract liquidity on the DEX. Finally, because SILK is the primary pairing the router is able to easily elicit high value trades through the router. Shade Protocol earns revenue from SILK adoption. By having a stablecoin be at the center of the DEX as opposed to a volatile governance token, ShadeSwap has a massive distinct sustainability advantage compared to other DEXs.

Integration Incentives
Tokens are a key part in determining the incentives of integrations. Here are a list of diverging integration incentives that emerge from primitives having different tokens:

Because Shade Protocol is an array of connected privacy-preserving DeFi applications, multiple Shade Apps can all work together so as to make brand stronger, share revenue, retain users, all while creating a seamless UI/UX experience. While Shade Protocol is happy to interact with 50/50 incentive splits (often considered an industry standard on DEXs), the protocol will be biased towards the net positive that is directly integrating products with itself.

Below are screenshots live on testnet. ShadeSwap is currently under audit. 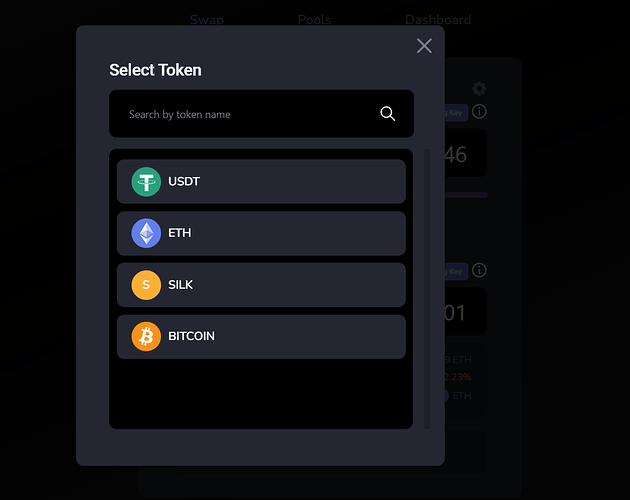 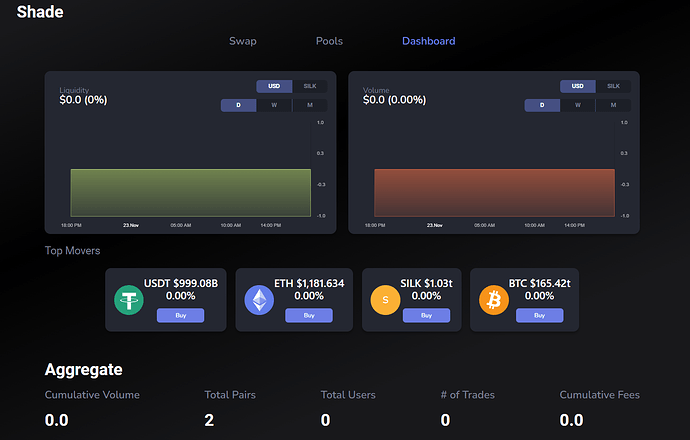 Key Features
The following is a list of ShadeSwap features:

StableSwap
As a user, you will be able to seamlessly bridge stablecoins (USDC, DAI, FRAX, etc.) and other crypto assets (ATOM, OSMO, etc.) onto the Shade App using the ShadeBridge. This UI/UX is powered by Axelar and IBC.

One of the most unique differentiators of ShadeSwap is the UI/UX emphasis on single-sided LP: 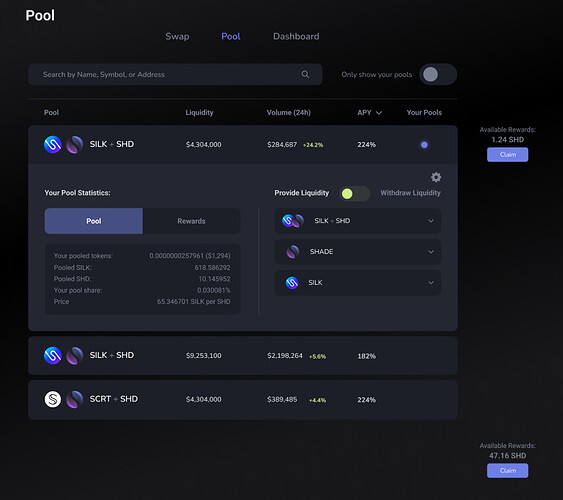 Once you’ve bridged your stablecoins in, you will be able to trade for other stablecoins with fees as low as 0.04%! Compare this to other Cosmos AMMs such as Osmosis where trading fees for stablecoin to stablecoin trades are as high as ~0.40%.

Stablecoin trading on ShadeSwap using the SilkSwap invariant will be ~10x cheaper than the cost to trade stablecoins on other Constant Product Market Makers (CPMMs). 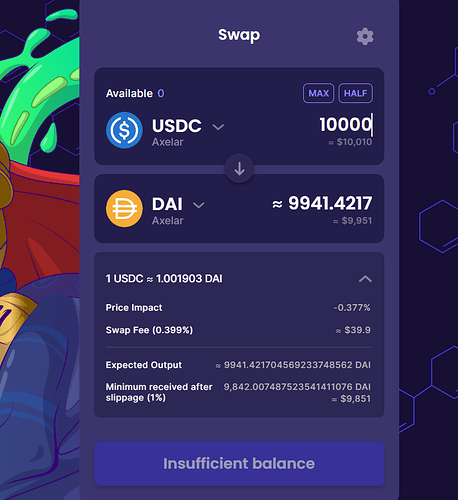 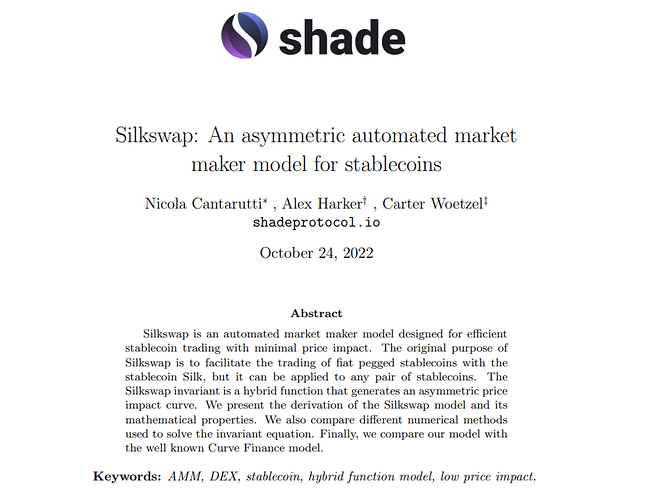 image827×640 72 KB
Shade Protocol is releasing a novel, never before implemented curve for trading that improves the computational efficiency of Curve, while also introducing novel capital protections and controls on trades that diverge from where liquidity is focused on the curve. 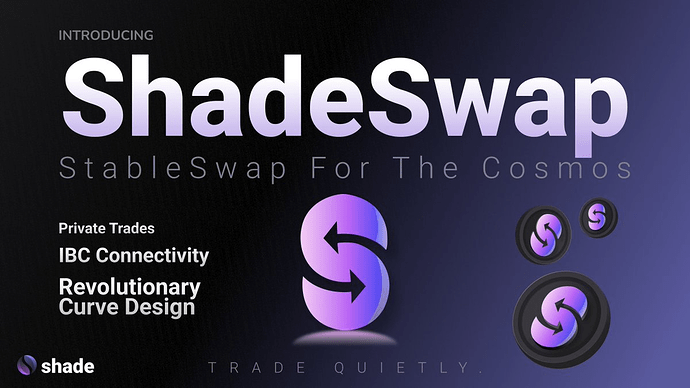 In this article, learn about ShadeSwap - an IBC enabled stableswap and DEX built by Shade Protocol.

I generally support the idea of one-time liquidity injections. After reading this I think I will take a stance that I won’t vote ‘Yes’ until I have been able to see, test, and/or use the Dapp.

The above 4-step approach looks both realistic and fair to all parties IMHO. We get to see what we invest the pool’s resources in, the team gets injection 7 days after launch.

@Stefan_DomeriumLabs I agree with this order - we will have a testable endpoint up soon enough so folks can check out the app in advance of voting on the proposal.

I hope this information was helpful for you to understand exaclty what ShadeSwap is.

@winston @orageux101 would having the app on a testnet endpoint for anyone to be able to access / use in advance of mainnet be an acceptable / adequate substitute?

Since airdrop challenges were not uncovered until mainnet deployment, I would consider testnet insufficient.

On another note, L1 incentives should ideally only be deployed for L1 pairs and/or L1 derivative pairs.

This would ensure users would need to hold the L1 in order to receive the L1 incentives.

Edit: If SCRT can be used as collateral for SILK, I would also consider L1 incentives for SILK pairs appropriate so long as the parameters are at least as competitive as Sienna (primarily, a 65% collateral factor).

For instance, if $10 of SCRT is supplied then up to $6.5 of SILK could be borrowed before liquidation.